The city of Paris is ideal for walking, it is a great way to view many of its iconic monuments plus you can also stumble upon the unexpected as you wander its streets - and the great thing is it's free!

The size of the city means you can cross west to east or north to south within a couple of hours There are a number of things to consider before setting out: 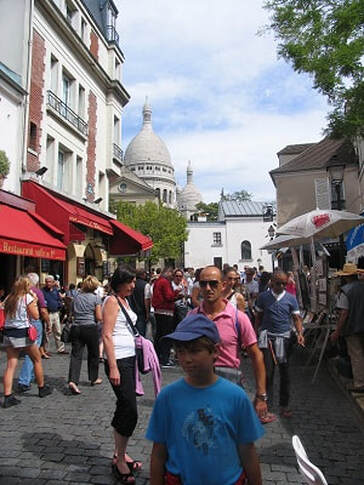 ​It may seem obvious but decent footwear is essential - no, not to be as fashionable as some of the locals but to be comfortable. A well-worn tried and tested pair are best - there are no 'style police' in Paris and its not the place to break in your new holiday shoes!

You'll probably have checked the weather forecast prior to your trip so you should have the appropriate clothing for whichever season you have to decided to take your holiday. It's also a good idea to use our tried and tested up-to-date method - look out the window or step into the street before you head out! A small collapsible umbrella is a handy thing to have for that unexpected shower!

Get hold of a good map - even before you go - and try and familiarise yourself with the different areas of Paris. The city is officially divided into 20 arrondissements or districts, which have their own unique features but like many modern international cities some of them have lost this due to the desire (and need) to market themselves to their visiting population rather than Parisians themselves. We suggest if you have time to, try and seek out a little of the real Paris away from the hoards of tourists. That's not to say don't do the obvious things - you can't come to Paris and not!

Carry a zipped bag, over the shoulder styles can feel safer but you may want to consider a normal carrier style bag as it will make you look less like a tourist and of less interest to the many opportunists who will try and force their wares or imaginary problems on you.

Lastly take a picnic - when you are a little leg weary it is good idea to stop, take stock and refuel. Try and find one of the many green spaces of the city to sit and people watch.

Many of our favourite experiences have been had by getting lost in this great city of Paris.