trains to paris from CDG TERMINAL  2

​​TRAINS FROM CDG TERMINAL 2 TO PARIS

To get to Paris by train from CDG Terminal 2,on arriving, you need to make your way to 'Aeroport Charles de Gaulle 2' train station -  within the terminal,it is located between Halls C/D and E/F. This station is for both TGV and RER trains.
​Simply follow the signs 'Paris par train' / 'Paris by train'
Current fare is €10.30 one-way for adult and €7.00 for children. 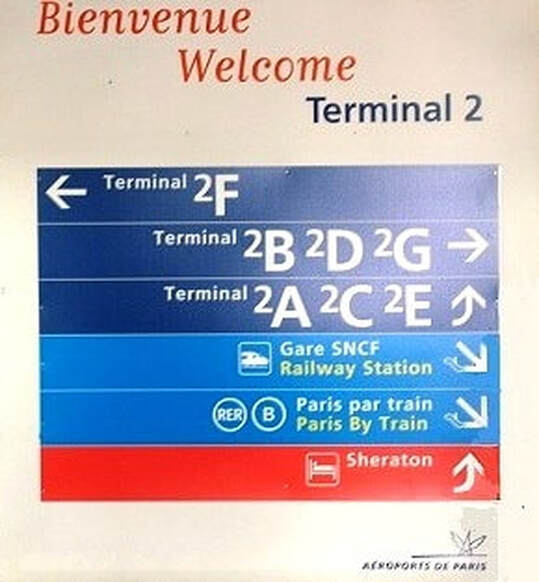 It can be reached from Terminal 2 locations (Halls) by walking / moving walkways (quite long). You will find signs as to how far you are away from each of the other locations and the station within the  Terminal. Longest walking journey is around 20 minutes. 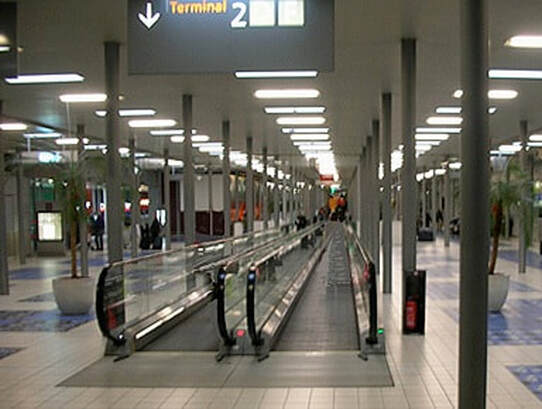 There is also the option of using the free airport bus 'Aeroports de Paris N1'.- if you have arrived at Terminal 2A or 2B and don't want the 20 minute walk for example (you do have moving walkways to assist you) you can catch the bus at gate A5 at Terminal 2A and gate B6 at Terminal 2B. They have a 15 to 20 minute frequency.

You get off at the 'Terminal 2 railway station' stop and follow the signs as above.
​By following the signs you will eventually reach the large antrum that is level 4, you are greeted by the massive flight display board and SNCF's (the French railway company) not too subtle pink columns letting you know you have to go down to get to the station. 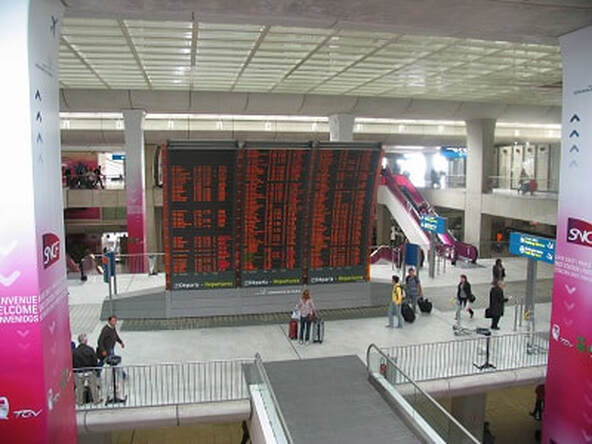 You descend to the next level via the escalators. 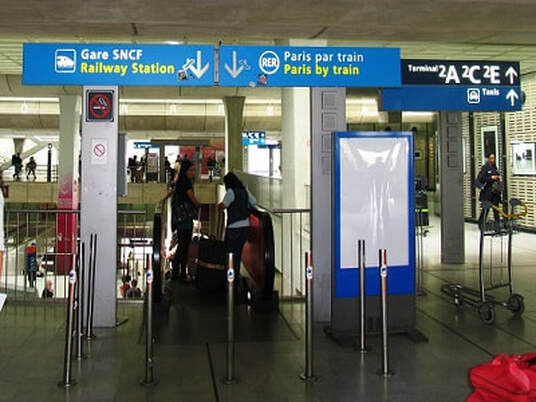 You will find plenty of ticket vending machines at both stations. You have to use the Billetterie Ile-de-France vending machines (green here for some reason) and not the yellow SNCF TGV machines, as they do not sell tickets for the RER B. You must use a 'smart chip enabled' card at these machines or cash. They are 'touch screens' with multi-language choices and easy to use. 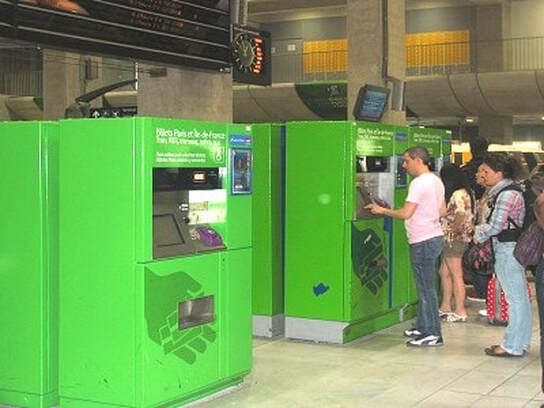 If you have a problem with paying for your tickets with your card or do not have euros you can buy them from the nearby SNCF ticket office though this can be a busy place at times. 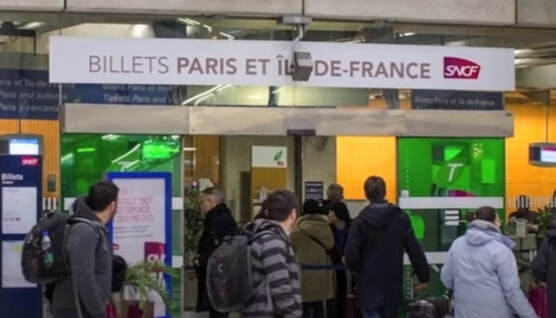 Your ticket is valid for the journey to the centre of Paris  This ticket is also good for a transfer from the RER to the local Metro system and an unlimited number of transfers once you are inside the Metro as long as you don't exit a metro station.
Once you have your ticket you then descend to Level 1 - which is a mid-level and seems like a great waste of space, before continuing to follow the signs 'Paris par train'. 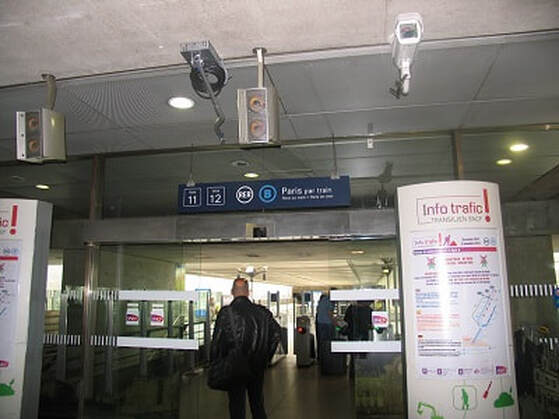 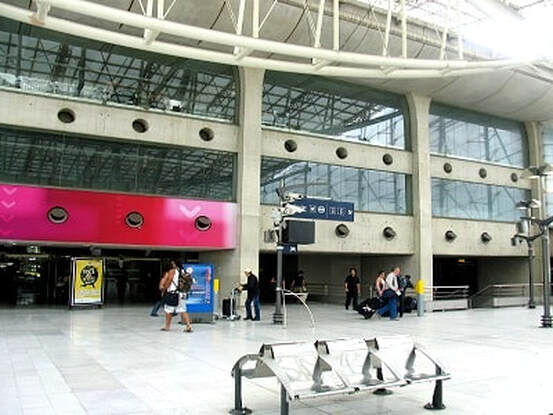 Remember the station is split into two distinct sides, the one you want is for RER suburban trains (for Paris city centre), the other, for the TGV high speed intercity trains - be sure and choose the right one!  Just follow the signs.

Descend on to to the platforms. 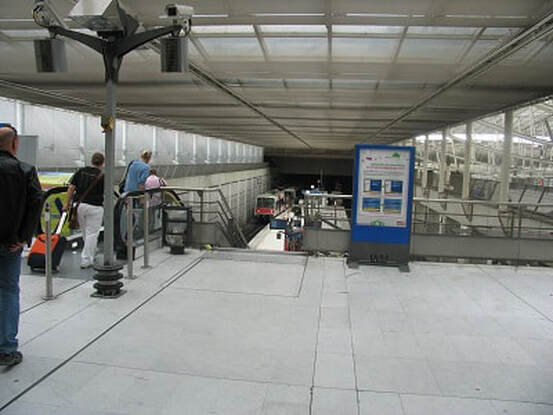 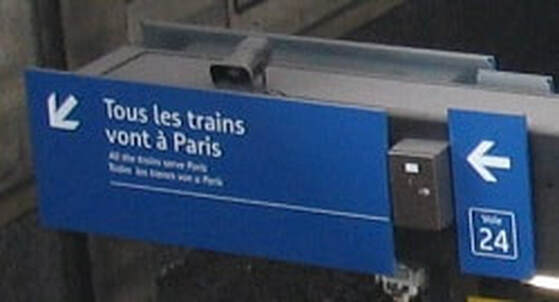 The platform signs read 'Tous les trains vont à Paris' all the trains serve Paris. When the the train arrives the doors should open automatically but if they don't just push on the rubber button to operate. 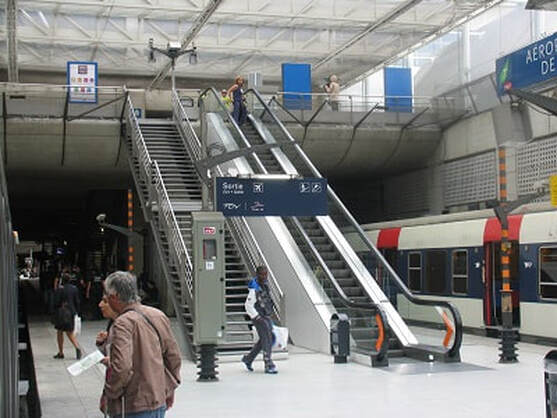 Don't be put off by the sign on the platform saying 2 TGV as this is just the name of the station - you are at the right place - quick guide -  RER trains are RED, TGV are BLUE. 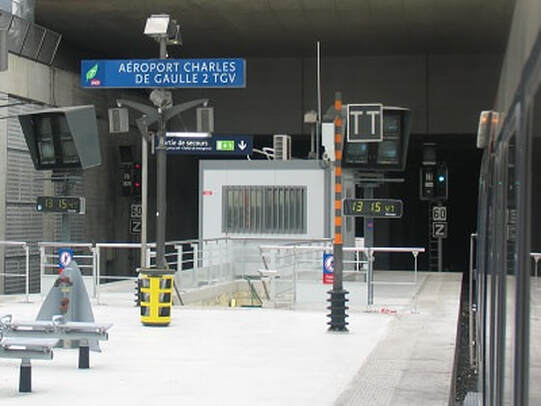 As this is the end of the line all trains go to Paris!
You should have chosen you destination based on where in the city you are staying. The train's first major stop in the city is Gare de Nord (about 30 minutes) though some of the trains stop at suburban stations on route. Other stations served are Chatelet Les Halles, St. Michel-Notre Dame, Luxembourg, Port Royal, Denfert Rochereau and Cité UniversitaireTravel, so you have plenty of choices to get near your destination or hotel. The one price ticket is good for all these stops and for continuing on the metro network in central Paris if necessary. 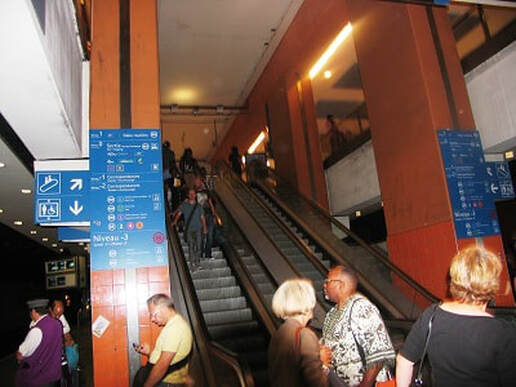 Once you arrive in Paris, at whatever station you choose, you will find exits (Sortie) or onward travel information well signposted. 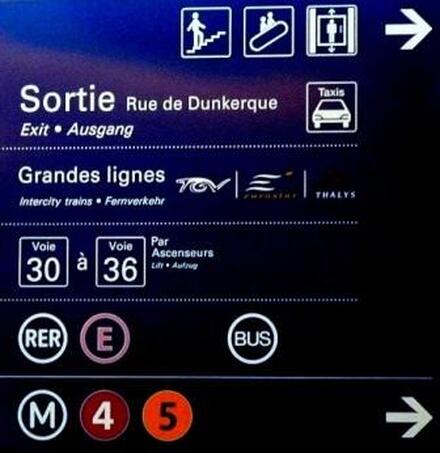 From the example above (at Gare de Nord) you can see that you have access to the French rail system SNCF for onward travel  via the TGV, Thalys & Eurostar trains from platforms 30 & 36. The metro (M) numbers are the lines you can access from here, in this case lines 4 & 5. This will vary from station to station with often more than one option. From this particular sign you can see you can transfer to line E on the RER. You have the option of stairs,escalator or lift to the exit to the station where you will have access to taxis or buses

Sortie = Exit, Voie = Platform
Trains depart every 10 to 15 mins.and travel time by direct train to Gare du Nord is 30 mins.
Direct trains go non-stop to Gare du Nord while the other (suburban) trains make a number of stops and take a little longer. Check with overhead board before boarding.
The first RER train leaves the airport at 4:56 a.m. The last train departs at 11:56 p.m.

TGV/RER station is underneath Terminal 2 (between terminals 2C/2E and 2D/2F).
Platforms are on level 1 while SNCF ticket purchase office / informations are available at level 2.
Access to terminal buildings and CDG VAL shuttle train station is at level 4


To help plan your trip to your final destination check-out RATP's interactive maps and route planner  http://www.ratp.fr/  where you will find maps for RER trains, buses, night buses and the Metro.
◄Back to Paris by train

◄Back to CDG to Paris
​
►From terminal 1