trains to paris from
CDG terminal  1

From CDG terminal 1 to paris by train

The RER line B  suburban train is the fastest and one of the cheapest ways into Paris.
To get to Paris by train from CDG Terminal 1 you are heading for 'Aeroport Charles de Gaulle 1' train station within the airport complex. The name however is a bit of a misnomer as it is actually the name of the train station near Terminal 3,'Roissypole', not Terminal 1.The shuttle train 'CDGVAL' (Véhicule Automatique Léger) links Terminals 1, 2, and 3.

Follow the signs as above.
You will have arrived on Level 3 of Terminal 1, you need to descend to the lower level following the signs for  CDGVAL, this is the free shuttle train that will take you to the RER train station for Paris. 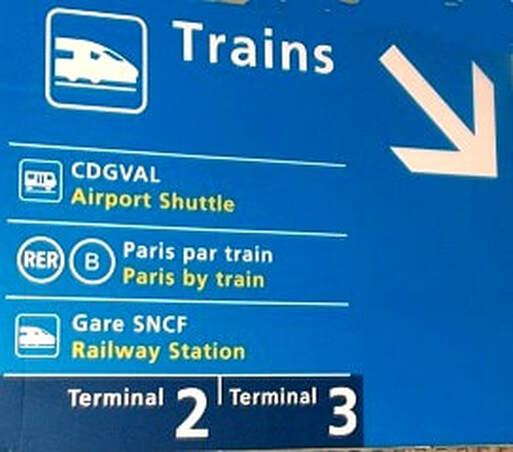 You will see this display of train times and 'Paris by train' signs as you enter the access to the CDGVAL. 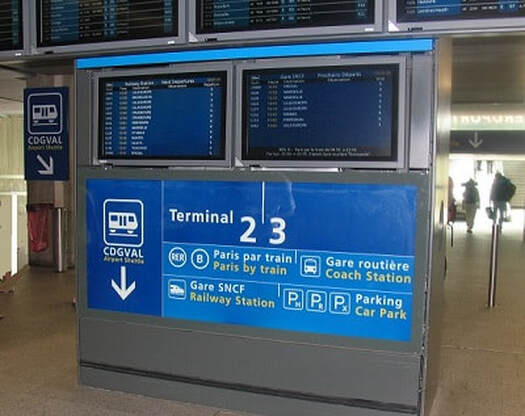 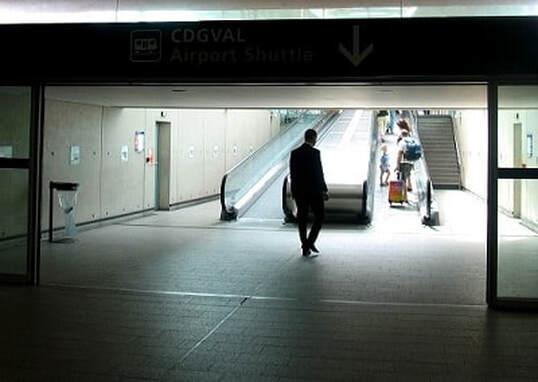 An escalator will take you to the shuttle platform. 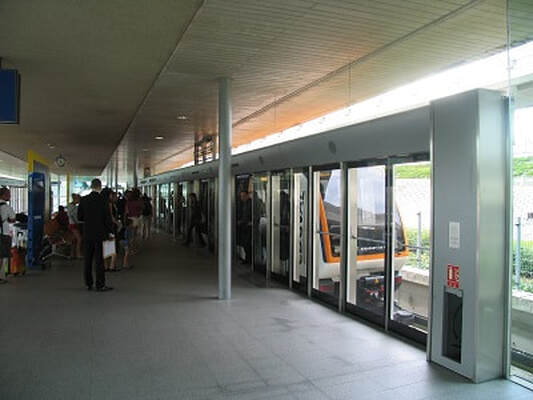 You will have very little time to wait as they operate every five minutes. 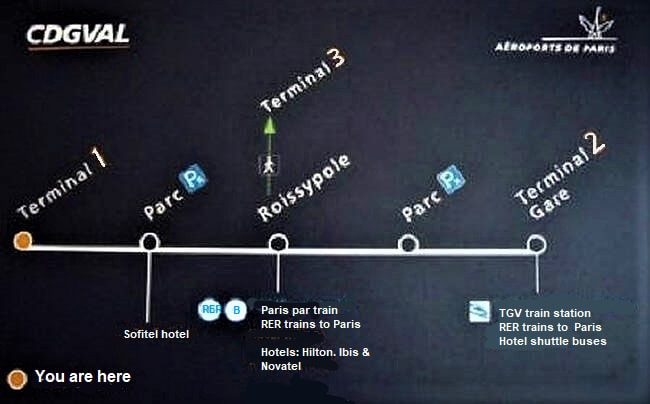 The CDG VAL shuttle train will take you to terminal 3 (6 mins) where you exit for the RER station. 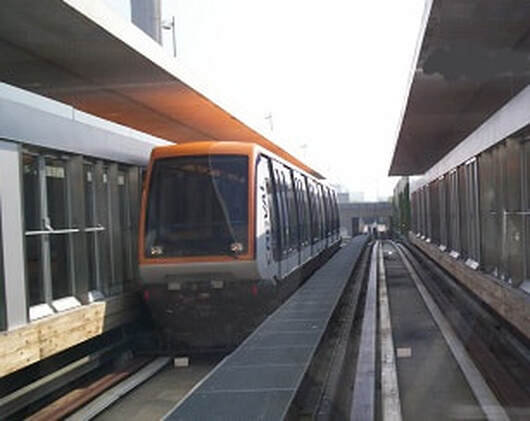 The shuttle will stop first at the car park PR then terminal 3. There are announcements in English as well as other languages so you can relax! Don't worry that you have not passed through Terminal 2 before you arrive at 3 as this is the way it is laid out  - get off here ! (Now you know you are in France!) 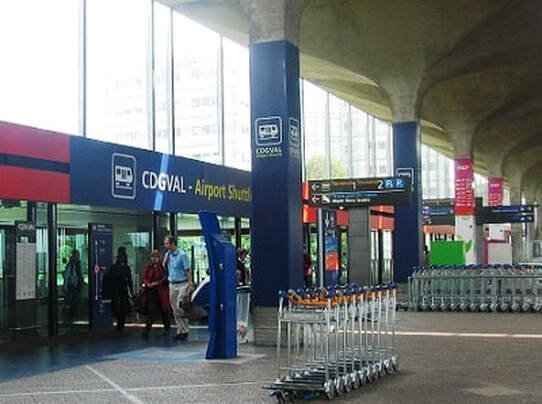 You will arrive at 'Roissypole' at CDG which contains the RER train station (Aeroport CDG1). Turning right will take you to the ticket machines for the RER trains and in the direction of the station. 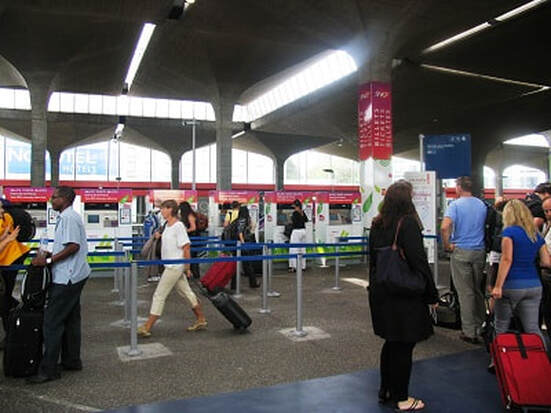 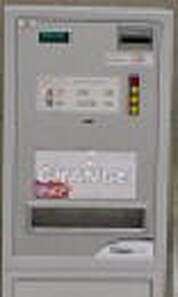 You will find plenty of ticket vending machines here.The tickets are known as 'Billets Ile-de-France'. You must use a 'smart chip enabled' card at these machines or cash - coins only!.    **There are also ticket windows nearby - but these tend to be busy with people who can't use their card or did not bring any euros in change !!!.  If you only have notes there are a few  'coin change ' machines-but again they tend to be busy - if you can find them  ---the answer is to take a bunch of euro coins with you!

Once you have your ticket follow the signs saying "Access aux trains" or "All trains". This will lead you down an escalator to the train Platform. 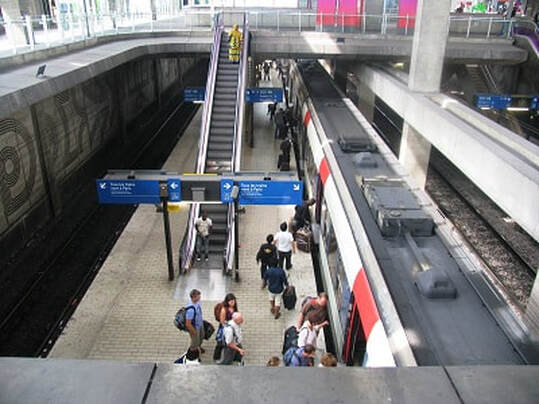 When using the ticket from and to the airport (as with tickets for the RER trains and the metro) you have to use it to enter and sometimes to exit the train. Always keep the ticket handy as the SNCF guards sometimes check tickets and if you are without one you may be fined €40. This means that after you use your ticket at the entry gate, you must retrieve it from the machine and keep it with you until you leave the train/metro system (it continues to work here ) including any connections. 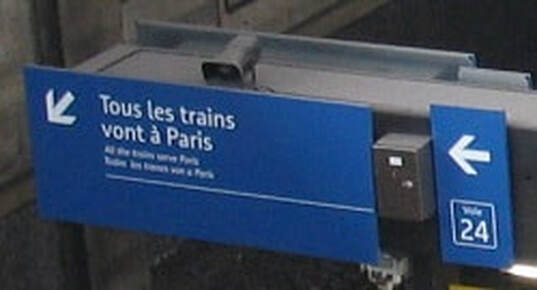 The platform signs read 'Tous les trains vont à Paris' all the trains serve Paris. When the the train arrives the doors should open automatically but if they don't just push on the rubber button to operate.
You should have chosen your destination based on where in the city you are staying. The train's first major stop in the city is Gare de Nord (about 30 minutes) though some of the trains stop at suburban stations on route.Choose trains marked 'court' if you have the choice as these are the direct ones. Other stations served are Chatelet Les Halles, St. Michel-Notre Dame, Luxembourg, Port Royal, Denfert Rochereau and Cité Universitaire Travel, so you have plenty of choices to get near your destination or hotel. The one price ticket is good for all these stops and for continuing on the metro network in central Paris if necessary. 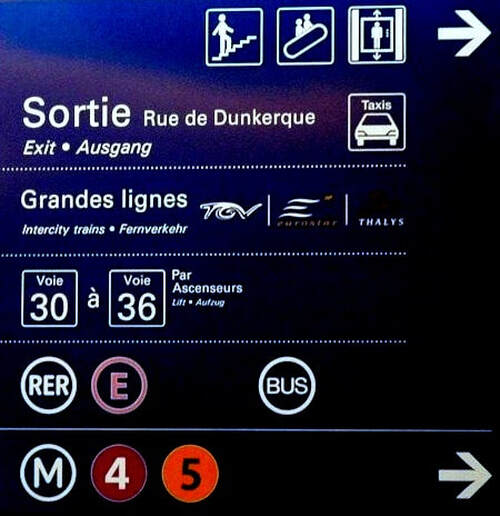 Once you arrive in Paris, at whatever station you choose, you will find exits (Sortie) or onward travel information well signposted.
​From the example above (at Gare de Nord) you can see that you have access to the French rail system SNCF for onward travel  via the TGV, Thalys & Eurostar trains from platforms 30 & 36. The metro (M) numbers are the lines you can access from here, in this case lines 4 & 5. This will vary from station to station with often more than one option. From this particular sign you can see you can transfer to line E on the RER. You have the option of stairs,escalator or lift to the exit to the station where you will have access to taxis or buses.

Trains depart every 10 to 15 mins.and travel time by direct train to Gare du Nord is 30 mins.
Direct trains go non-stop to Gare du Nord while the other (suburban) trains make a number of stops. Check with overhead board before boarding.
The first RER train leaves the airport at 4:56 a.m. The last train departs at 11:56 p.m. The typical transit time to Gare du Nord is 25 minutes. It's about 28 minutes to Châtelet and 45 minutes to the end of the line at Denfert-Rochereau.


To help plan your trip to your final destination check-out RATP's interactive maps and route planner  https://www.ratp.fr/  where you will find maps for RER trains,trams, buses, night buses and the Metro.

◄Back to Paris by train

◄Back to CDG to Paris